What are the health risks from ionising radiation?

It has been known for many years that large doses of ionising radiation, very much larger than background levels, can cause a measurable increase in cancers and leukemias ('cancer of the blood') after some years delay. It must also be assumed, because of experiments on plants and animals, that ionising radiation can also cause genetic mutations that affect future generations, although there has been no evidence of radiation-induced mutation in humans. At very high levels, radiation can cause sickness and death within weeks of exposure - see  Table.

The degree of damage caused by radiation depends on many factors Ð dose, dose rate, type of radiation, the part of the body exposed, age and health, for example. Embryos including the human fetus are particularly sensitive to radiation damage.

But what are the chances of developing cancer from low doses of radiation? The prevailing assumption is that any dose of radiation, no matter how small, involves a possibility of risk to human health. However there is no scientific evidence of risk at doses below about 50 millisieverts in a short time or about 100 millisieverts per year. At lower doses and dose rates, up to at least 10 millisieverts per year, the evidence suggests that beneficial effects are as likely as adverse ones. 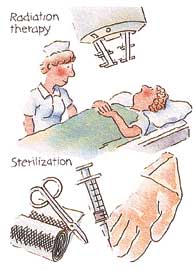 Higher accumulated doses of radiation might produce a cancer which would only be observed several - up to twenty - years after the radiation exposure. This delay makes it impossible to say with any certainty which of many possible agents were the cause of a particular cancer. In western countries, about a quarter of people die from cancers, with smoking, dietary factors, genetic factors and strong sunlight being among the main causes. Radiation is a weak carcinogen, but undue exposure could certainly increase health risks.

The body has defence mechanisms against damage induced by radiation as well as by chemical and other carcinogens. These can be stimulated by low levels of exposure, or overwhelmed by very high levels.

On the other hand, large doses of radiation directed specifically at a tumour are used in radiation therapy to kill cancerous cells, and thereby often save lives (usually in conjunction with chemotherapy or surgery). Much larger doses are used to kill harmful bacteria in food, and to sterilise bandages and other medical equipment. Radiation has become a valuable tool in our modern world.

Tens of thousands of people in each technically advanced country work in medical and industrial environments where they may be exposed to radiation above background levels. Accordingly they wear monitoring 'badges' while at work, and their exposure is carefully monitored. The health records of these occupationally exposed groups often show that they have lower rates of mortality from cancer and other causes than the general public and, in some cases, significantly lower rates than other workers who do similar work without being exposed to radiation.