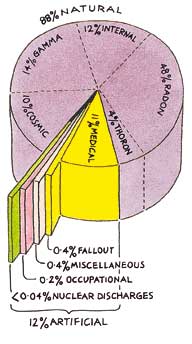 Naturally occurring background radiation is the main source  of exposure for most people. Levels typically range from about 1.5 to 3.5 millisievert per year but can be more than 50 mSv/yr. The highest known level of background radiation affecting a substantial population is in Kerala and Madras States in India where some 140,000 people receive doses which average over 15 millisievert per year from gamma radiation in addition to a similar dose from radon. Comparable levels occur in Brazil and Sudan, with average exposures up to about 40 mSv/yr to many people.

Several places are known in Iran, India and Europe where natural background radiation gives an annual dose of more than 50 mSv and up to 260 mSv (at Ramsar in Iran). Lifetime doses from natural radiation range up to several thousand millisievert. However, there is no evidence of increased cancers or other health problems arising from these high natural levels.

Ionising  radiation is also generated in a range of medical, commercial and industrial activities. The most familiar and, in national terms, the largest of these sources of exposure is medical X-rays. A typical breakdown between natural background and artificial sources of  radiation is shown in the pie chart.

Natural radiation  contributes about 88% of the annual dose to the population and medical procedures most of the remaining 12%. Natural and artificial radiations  are not different in kind or effect.