Radiation is energy travelling through space. Sunshine is one of the most familiar forms of radiation. It delivers light, heat and suntans. We control its effect on us with sunglasses, shade, air conditioners, hats, clothes and sunscreen.

There would be no life on earth without lots of sunlight, but we have increasingly recognised that too much of it on our persons is not a good thing. In fact it may be dangerous, so we control our exposure to it.

Sunshine consists of radiation in a range of wavelengths from long-wave infra-red to short-wavelength ultraviolet, which creates the hazard.

Beyond ultraviolet are higher energy kinds of radiation which are used in medicine and which we all get in low doses from space, from the air, and from the earth. Collectively we can refer to these kinds of radiation as ionising radiation. It can cause damage to matter, particularly living tissue. At high levels it is therefore dangerous, so it is necessary to control our exposure.

Living things have evolved in an environment which has significant levels of ionising radiation. Furthermore, many of us owe our lives and health to such radiation produced artificially. Medical and dental X-rays discern hidden problems. Radiation is used to diagnose ailments, and some people are treated with radiation to cure disease. We all benefit from a multitude of products and services made possible by the careful use of radiation.

Background radiation is that which is naturally and inevitably present in our environment. Levels of this can vary greatly. People living in granite areas or on mineralised sands receive more terrestrial radiation than others, while people living or working at high altitudes receive more cosmic radiation. A lot of our natural exposure is due to radon, a gas which seeps from the earth's crust and is present in the air we breathe. 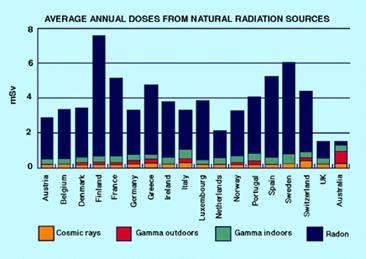