Charles Sturt University is proud to lead the Southern NSW Hub, one of eight hubs being established across Australia to combat drought and form the epicentre of user-driven innovation, research and adoption and facilitate transformational change through the co-design of research, development, extension, adoption and commercialisation (RDEA&C) activities.

Based at the Charles Sturt University AgriPark in Wagga Wagga, the Southern NSW Drought Resilience Hub will enable regional stakeholders to have a voice in drought resilience activities, collaborate with experts, gain access to resources, and participate in adoption programs such as workshops, seminars and field days.

Economic resilience for an innovative and profitable agricultural sector

Environmental resilience for sustainable and improved functioning of farming landscapes

The northern boundary of the Southern NSW Hub is described by a line from Broken Hill to Cobar, which joins the Macquarie catchment northern boundary near Quambone. We include most of the Macquarie River catchment, specifically the higher elevation areas in the upper reaches and Macquarie River-dependent irrigation areas, and lower reaches of the Darling River, south of 32 degrees latitude. The Southern NSW Hub boundary follows the western and southern edges of the Hunter catchment and joins the northern edges of the Sydney Catchment near Kandos and meets the coast near the mouth of the Hawkesbury River. The Southern NSW Hub's southern and western boundaries are the VIC and SA state borders.

Be a part of a team making a significant impact on the drought resilience capacity of the agricultural industry and rural, regional and remote communities living with the issue and consequences of drought.

To register your interest, please contact us at the email address below.

Get in touch with us 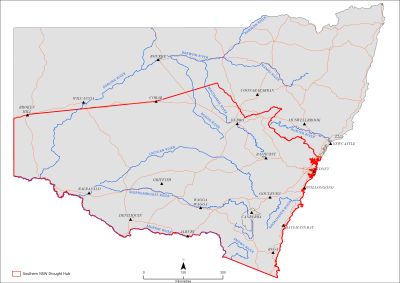 As a regional stakeholder, the Southern NSW Drought Resilience Hub gives you a voice in drought resilience activities and an opportunity to collaborate with experts, gain access to resources, and participate in extension and adoption programs such as workshops, seminars and field days.

Charles Sturt University aims to create a world worth living in